Tyler’s case study – Unlocking communication at home and in school

Tyler (8) transferred to Abbot’s Lea School (an outstanding special school) after previously struggling with noise levels, busy environments and pace of learning. Abbot’s Lea School provided a much smaller setting, where teachers and specialist staff were better equipped to meet his learning, communication and sensory needs.

Tyler struggled particularly with communicating his thoughts and needs, and although he was making good progress with his speech and language therapist, his teacher thought that there could be other ways to support Tyler’s speech development. “It was as if all the words and the thoughts were in his head, but he just could not get them out”.

Tyler’s teacher encouraged him to try using the Chatta approach alongside his speech and language work both in the classroom and at home. The impact was fairly instantaneous. Due to the simplicity of the approach and ease of use, Tyler picked it up quickly. “He’s always been a fan of technology, and I personally knew that using Chatta would be a huge hit. It makes an excellent connection between both school and home,” said Tyler’s mum.

Before using Chatta, Tyler had struggled to verbalise his needs and wants and was experiencing a lack of confidence because of this. Tyler’s mum says, “It’s astonishing to look back on the early days of his speech recordings, barely recognising single words.” Tyler’s teacher added, “Tyler had been incomprehensible to most people he encountered. His parents understood mostly, but those not familiar with him would struggle, which understandably led to frustration on Tyler’s part.”

Using Chatta as the link between home and school

Tyler used Chatta to chart his daily activities by taking photographs and creating a Chatta board with his teacher where he would build sentences and rehearse these before recording his own voice. He would then discuss his day with his parents when he got home from school each day.  Previously, Tyler would struggle to communicate anything about his day to his family when he got home from school.

After Chatta had been introduced, he would happily show off his work from the day and also chat with his family about the things he had done. The more the process was used, the greater the improvement in his speech which became clearer and Tyler became a more confident communicator.

Tyler has now made significant progress and is speaking in clear, well-structured sentences. His teacher says “Tyler was making good progress with this speech and language therapy program, however Chatta has added an extra dimension and his verbal communication has become so clear in such a short space of time since using it daily. He’s now the first to get up when someone comes into the room and introduce himself and show them around the classroom. He’s such a superstar – it’s so wonderful to see.”

Using Chatta as a family

Using Chatta has helped the whole family. Tyler can sit down at the end of the day and use the boards to reflect on the day’s events. He can then sit and compile his pictures, and record his own voice narrative of the events of his evenings and weekends at home.  The following day he will then proudly present his story to friends and teachers back at school.

The impact has been significant for the whole family. The method not only opened up communication between the school and home but also with Tyler and his family. His younger brother now loves to get involved too.

His mum loves how much it has helped him to grow, “He has found a way to tell his own story with confidence. It makes us emotional looking back on his huge progress. I think most families would benefit from Chatta, there are simply no negatives.” 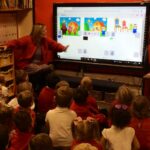 Making an Impact on Communication, Language and Vocabulary in EYFS classes

Characteristics of Effective Learning in the Early Years

Development Matters and the revisions to the EYFS framework